The United Nations receives “Florecer 17”, a poster in tribute to the 75th anniversary of the UN and its work for the SDGs.

Ciro Palomino, a young Peruvian illustrator, has designed “Florecer 17”, a poster that illustrates the diversity of actions that boys and girls carry out to achieve the 17 Sustainable Development Goals within the framework of the 2030 Agenda.

Ciro Palomino spoke with UN Peru and pointed out that the poster “is a blossoming for every action we do as volunteers, as artists or as citizens. Today we are all participants in the change and this flowering towards a common goal involves the 17 goals”.

“Florecer 17” shows us in the illustration of each SDG “the sprout of change, children who play, girls who study, children who recycle, children who are part of these changes. I believe that in these 75 years, all these ideas have flourished in children and today they should be part of their conscience, it is a goal that we have to achieve”- says Ciro Palomino.

In his career as an illustrator, Ciro Palomino has been recognized in various opportunities both in Peru and internationally. In 2016 he won the prize in the “Posters for Peace” contest, organized by the United Nations Office for Disarmament Affairs. Palomino's work was selected from more than 4,000 artwork submitted from 125 countries. "It's like winning the Oscar" - Ciro Palomino told UN News. Listen HERE the interview (in Spanish).

Likewise, Ciro Palomino led the initiative with the United Nations Information Center (UNIC Lima) that brought together schoolchildren from the High-Performance School of Lima (COAR Lima) to design the images of the Sustainable Development Goals in Quechua language. Watch the video HERE. 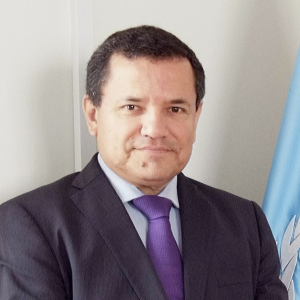